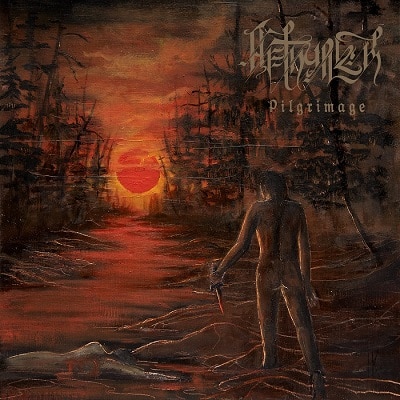 LP-version comes with an insert. Black vinyl only.

“By now, Aethyrick should require little introduction. Since their formation in 2016, the duo of Gall and Exile have begun a meteoric ascent in the black metal underground that’s culminated in three increasingly celebrated full-lengths for The Sinister Flame: 2018’s Praxis, 2020’s Gnosis, and last year’s Apotheosis. While such a feverish release schedule would otherwise suggest a mindset of quantity over quality, nothing could be further from the truth for these Finns: Aethyrick have boldly and confidently etched a unique headspace all their own, bountifully brimming with magick and mysticism simultaneously aeons-old and strikingly modern. That they’ve been able to be comfortable enough in that skin to summon creations seemingly so effortlessly is perhaps more amazing than their already-sturdy aesthetic.

And much as “feverish” aptly described the aforementioned Apotheosis, like clockwork does another engrossing full-length grace our ears: Pilgrimage. Everything is in the title: here on Pilgrimage, Aethyrick journey to a sacred place – one deep in their hearts, its secrets known only to them – that could verily evoke nostalgia or a simpler time or foundational feelings or any combination thereof. But, that’s merely in the music itself, which takes on a more ponderous gait, mystical synth swirling around a steady mid-tempo thrust of bittersweet darkness; even the well-timed bouts of speed maintain a nobler yet more-resigned aspect. It immediately sounds like Aethyrick‘s black metal – that is, traditional all-caps BLACK METAL spoken in their own enrapturing dialect – and one that suggests new journeys to embark upon, new stones to uncover.

And yet, that’s only half the story of Pilgrimage. As Aethyrick explain, “The red thread running from the first track to the last is threefold. The outer layer tells a story of an individual who cuts himself loose from the mundane world of his fellow men through the act of murder most foul and goes into the wilderness to live as a hermit – a king of his own realm, as it were – never to return. Under this narrative, one can find a poetic description of a gradual shift in perception – the rather inherent illusion of man as the very crown of creation is replaced by the realization of his absolute oneness with all nature. And yet, at the heart of it all, there are the eight steps of a foundation rite rooted in the tradition that gave birth to Aethyrick in the first place.”